Game Review: The Little Fox - Fun, Original & Just The Right Amount of Difficult
Published on Fri, Mar 29, 2019 11:22 PM
When you see a game called The Little Fox, you've probably already figured out that it won't be some action-packed war game where you shoot and blow up everything in sight, but rather a cute and fun game involving a small fox in some way. This is exactly what this Android game is. But while it's arguably the cutest game that came out this year, don't think for a second that this means you'll get a game so easy that a trained monkey could beat on his first attempt. The Little Fox may be cute, but it's also challenging and requires lots of skill and focus to progress.
Game Overview

The Little Fox is essentially a game in the endless runner or autorunner style. This simply means that your character automatically advances through a level, while you control its direction and can sometimes perform special moves. At the same time, you must take care to avoid obstacles or collect valuable items.

In this game, you control a literal small fox character who runs through levels on a hexagon grid. The game's controls are very simple. All you do is tap left to move to the left and tap right to move your fox to the right. There are no jumps, spins, flips or other acrobatics you can perform. Any special moves will be done for you by the game. Your goal is to keep your fox on the path made of hexagons and collect tears along the way, in a similar fashion to how Mario grabs coins or Sonic collects rings. 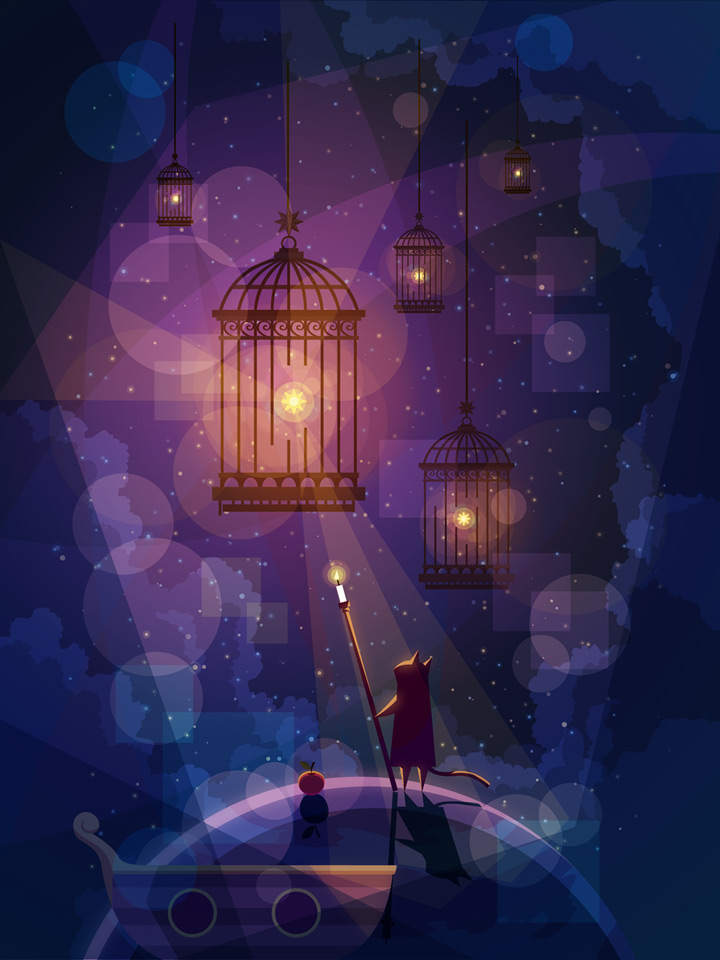 If you haven't played this game before, you may be left wondering what the challenging part of it is. After all, how hard can it be to keep a cute little fox running on a path? While foxes may not be nature's fastest running creatures, it looks like the one in this game is special, because the speed at which he runs would make a cheetah proud. This makes the game very fast-paced and requires that you give it your full attention. If you're looking for something you can play while you're half-asleep or multitasking on ten things at once, this really isn't the right title for you.

While your little fox may be fast, he isn't too tough and will die if he goes off the hexagonal path. This may seem sad, but remember, The Little Fox is a cute game, so your fox will resurrect quickly after each mishap. The problem is that each time this happens, you have to start the level again from the beginning. There are no checkpoints or save points in the middle of a level.

In addition to the tears that appear on your path, you'll also come across some special hexagons with various attributes. They can make your fox jump, speed up or slow down. But that's not all the special hexagons can do, as I found out the hard way. A few of them will reverse your fox. This means that if you're not careful, you'll find yourself back at the beginning of the level in a couple of seconds.

Some games, even seemingly simple mobile ones, have a very interesting plot that you discover as you make progress. If you like games with a well developed story, The Little Fox might leave you disappointed. The game does have a cute fairy tale story, but it's rather simplistic and some might find it strange, like if it was a deliberate parody of a book for small children.

The story involves Little Prince, who becomes separated from Rose (not a princess, but an actual, literal rose) while trying to see if there were more roses like her elsewhere in the universe. This makes Little Prince sad, which explains why he sheds the tears you find on your path. The Little Fox's mission is to collect the tears, use them to water Rose and find Little Prince so he can be finally reunited with her.

Previous versions of the game used to have cutscenes throughout the game that showed the Little Prince's story, but they have been removed without too much official explanation from the developers. The most likely reason is that the cutscene videos weren't displaying properly or causing the game to crash on some devices, as reported by a few people who played the game.

The Little Fox is completely free to download and play, but does contain some ads. When I played the game, it showed a quick 5-second ad every 3 to 5 times your fox died. Though on a few occasions, an ad would appear again on the very next fox fatality. It seems that the advertisers provide the funding for the fox resurrection program or something.

While the game can be enjoyed for free, it does have a freemium element to it. Each time your fox comes back to life at the start of a level, this costs you a virtual foxtail. If you run out of them, the game will give you 10 in exchange for watching an ad. However, the ads giving foxtails are of standard length, similar to that of a YouTube ad. If you want to skip these ads and get right back into the action after you accidentally kill your little fox, you have the opportunity to purchase foxtails. For just $0.99, you can get 100 of them and $2.99 buys you unlimited foxtails. The game stays perfectly playable and you can access all levels and features even if you never buy anything, but if you really get into it, buying foxtails is definitely worth considering, especially with their low price.

The Little Fox is a cute little game that has been made for people who like fast-paced autorunners. No need to learn dozens of controls or figure out complex puzzles, just stay glued to the screen while you help your fox navigate winding paths. As it's free to download and play, don't hesitate to give it a try. If you really get into it, remember that you can get unlimited foxtails without seeing ads for just $2.99, which is a very small price to spend on such a fun game.
Android News & Blog
Top APK Downloads